Ending the Sibling Rivalry: How to Teach Your Children to Get Along 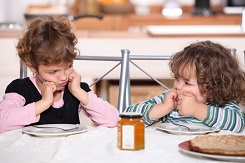 Thrust into a situation of constant time together and expectations of sharing can cause disagreements and arguments between siblings of any age, even if they are normally the best of friends. Parents and nannies alike often witness the clash of personalities and tiffs children have about everything from toys to friends, clothes and even attention.

Realizing that sibling disputes are common is helpful, but trudging through a day of constant bickering can rattle the nerves of the entire family. When siblings become rivals, it’s time to launch activities, games and techniques to squelch the disputes and teach them how to get along.

According to Dr. Jonathan Caspi, professor of family and child studies at Montclair State University, dismissing sibling rivalry can cause more harm than good. “Most people see aggression between siblings as an unavoidable, normal and ultimately harmless aspect of child development, yet it can often cause social adjustment and behavioral problems, some of which may be severe and even precursors to other forms of violence,” he says.

One of the primary reasons siblings fight is shared space, says Caspi, especially if they share a bedroom. Parents and nannies can expect conflicts over toys, remotes, television shows and the need for privacy. The day-to-day conflict will exist, but parents and nannies should seek to understand the underlying problem prompting sibling rivalry.

“Constant bickering has more to do with family dynamics and how parents are involved in sibling relationships,” says Caspi. “There is often a perception of favoritism and a lot of times, parents don’t see it, but kids do.”

Caspi suggests parents take the opportunity to praise good behavior between siblings often to provide the attention children need and to model the examples of what type of behavior is expected.

When siblings are at odds, it helps to show them the importance of both their differences and similarities. Caspi recommends helping your children operate as a team. Games work especially well with younger children with competitive natures.

Create a family-based trivia game with questions about each individual child. Questions can range from favorite foods and colors to best family vacation destinations, likes and dislikes. As your children work together to answer the questions, they will learn how to cooperate with each other and learn something new about their siblings at the same time.

When cooperating is a challenge, encourage your children to express themselves with positive statements versus negative accusations or the blame game. If disagreements are in full swing, ask your children to sit next to each other and write or say positive things about each other. It may seem awkward at first, but ultimately, when your witty seven-year old spouts off how he likes his brother’s funny faces at dinnertime, laughter is more likely to ensue than angry outbursts. This activity may also help each child think about the benefits of having a sibling – an instant playmate – on hand at all times.

Encouraging support in each other’s interests and activities can help build and strengthen sibling bonds, too. If one child has an interest in soccer or football, take the entire family to a professional game so siblings can learn more about the sport. If one child is a natural artist, enlist all children in an art workshop or ceramics class so they can try their hand at a sibling’s passion.

When siblings express interest in each other’s hobbies and activities, it can prompt more understanding and less competition, says Jeanette Smith, Florida-based family therapist. “Let one child feel like the most competent violinist and the other the most competent pianist,” she says. “Don’t pit them against each other so they can excel on their own without taking something away from the other.”

When encouraging activities together, it’s important for parents and nannies to be extremely cautious to avoid comparing their children to each other. “Never use one child’s behavior to motivate another child’s behavior,” says Smith. “The children will come to resent one another and then fight because they truly don’t like being compared.”

If sibling rivalry leads to moments of aggression or belittling behavior, it’s time to step in and address the behavior immediately. “If harm is being done through constant belittling, parents need to intervene, stop the behavior and give them the substitute behavior,” says Caspi. “In many instances, a child who says “you’re stupid” is trying to communicate that he needs his own space right now. Regardless, restraint needs to be taught and children need to know that those actions are not acceptable.”

In addition, listen closely to your child’s concerns or feelings about his or her siblings. According to Caspi, kids experience jealousy and perceive favoritism with their siblings. “These feelings have to be taken seriously,” he says. Take the opportunity to launch an open discussion and validate your child’s feelings. If necessary, set up an action plan to spend one-on-one time together with each child so that they feel valued as an individual.

0saves
Save
If you enjoyed this post, please consider leaving a comment or subscribing to the RSS feed to have future articles delivered to your feed reader.
← Shopping for Kids: Ways to Be Frugal Without Skimping | How to Deal with a Sense of Entitlement in Your Charges →