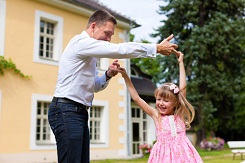 While both parents are important to their children, fathers have a very real impact on not only the way their daughters view men as a whole, but also the way that they view the world. As a father, it’s important that you take an active role in your daughter’s life and provide her with the affection and affirmations she needs to grow into a confident, secure adult. These ten tips can help you build up your daughter’s self-esteem while strengthening your relationship as a whole.

0saves
Save
If you enjoyed this post, please consider leaving a comment or subscribing to the RSS feed to have future articles delivered to your feed reader.
← Top 5 Apps Recommended for Nannies | 18 Blogs with Strategies for Using Positive Reinforcements with Your Kids →